It was publication day for The War Bride this week, and I’ve spoken elsewhere about the inspirations for it.

But I thought it was worth sharing a bit more of the background – specifically, the material I collected on the prevalence of bigamy in the early 20th century.

It was very widespread, particularly in the war years, and many cases came to light after the war, when the first husband returned home, or when the second wife turned up on the doorstep unexpectedly.

Here are some examples: 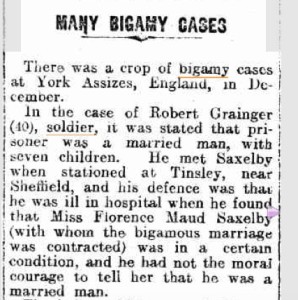 I love that phrase, ‘not the moral courage to tell her’.  I think that sums it up perfectly.  A particular kind of courage is needed in these circumstances, obviously, when a child out of wedlock would damn her in the eyes of everyone she knew. 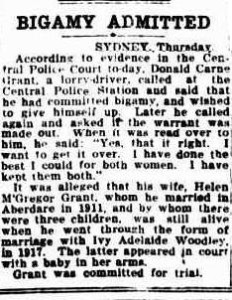 Look at the story to the right.  You do get the impression he found the whole thing a bit too much for him, don’t you, and thought going to the police was the simplest way out.

There were clearly many more cases which came out of the war.

Thirty-three cases in a week.  Think about that.

How often does bigamy come up nowadays? It happens, but usually it’s the result of someone deliberately living a double life.  That did happen during and after WWI, as we can see above, but a different kind of case was also common.

For a working class couple, divorce was pretty much unobtainable.  There were a number of reasons for this.  Firstly, there was no such thing as ‘no-fault’ divorce.  And physical or emotional abuse wasn’t really considered a ‘fault’ – as long as it was the husband doing the abusing.

You had to prove adultery.  And ‘proof’ meant proving it in a court of law.  Which meant that the ‘respondent (the guilty party) couldn’t just get up and admit it.  The person they had committed adultery with (the co-respondent) had to be named.  And there had to be a witness.  Some hotels specialised in providing chambermaids or room service waiters to ‘interrupt’ at a convenient time so they could testify to finding the parties in a compromising situation.

This was so blatant that at least some judges refused to accept the evidence.  And, of course, for the co-respondent to be named (particularly if they themselves were married, as they often were) was a scandal of the deepest hue.  They could literally find themselves cut off from all their friends and relations overnight.

Judges weren’t keen to grant divorces.  Divorce was seen as a threat to the moral order of civilization. Divorce cases caused the judge genuine concern about what would be the least damaging decision.  What the judicial system – and the laws – wanted to avoid was ‘to reward immorality’.

The system was slanted towards the rich, as well.  They often had solicitors who could organise everything for them, including the barrister which you needed in order to even walk into the courtroom.  And it was a full court case, complete with a jury of four. Very intimidating.

For a working class person, the task of finding a lawyer and embarking on a court case may have seemed insurmountable.  The class system was well and truly in place, even in Australia, although here it tended to be based more on money than pedigree.Then there was the cost.  An uncontested divorce – that is, one in which the respondent admitted to the adultery and didn’t object to the divorce happening – cost around £50-60.  The average wage was around £4 for a man, and lower for a woman.

Half a year’s wages, in other words, at a time when ordinary people lived from week to week and rarely managed to save.  And it cost more if the other party objected.

It was easier all round if the two people involved just agreed to go their separate ways.  The woman, if she had no children, usually went back to her maiden name.  If she had children, she pretended to be a widow.

And then they went on, quite often, to form new relationships.  Most of the bigamy cases come about because they failed to tell the new wife or husband about the old one, and they found out – often because the man had stopped paying child support and the old wife objected.  The easiest way for her to get a divorce (and thus an order of alimony for her and the children’s support) was to prove bigamy – then the divorce went through pretty automatically.  Sometimes it seems there is no real animus between the parties.

But there are a couple of cases which are just plain out nasty.  In 1910, there was a man in the USA arrested for ‘marrying’ and stealing from 19 women.  And during WWI, there was an Australian soldier who married eight different women – every time he was posted to a new town, he got married, presumably to avoid the STDs which were rife in the brothels.  And maybe to have someone do his washing… not quite the image of the bronzed Aussie ANZAC soldier, is it? 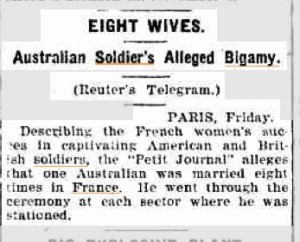 That case was even mentioned in Parliament and made the international news.
Of course, not only men were bigamists of this type. 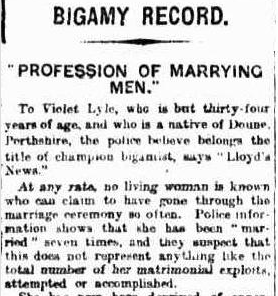 But there are other stories, which were far more shocking at the time than some of these.  This one is my favourite: 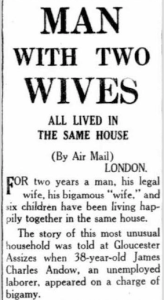 Isn’t that a nice story?  I’ve tried to find out what happened, without success.  If anyone knows, I’d love to find out the end of the story!