E.C. Ambrose has a new book out today, and has kindly agreed to tell us about the research she did for it – into being a medieval surgeon!

While I’d be the first person to tell you that most people in my period of interest, the later Middle Ages, were illiterate, one of the cool things I discovered during the research for my  Dark Apostle series, is the wealth of medical knowledge being shared through texts.  (I wrote a blog entry entitled “Books Must be Banned” railing against the vast number of books that appear in pseudo-medieval fantasies, but I digress. . .)

In the earlier Middle Ages, when the first universities devoted to medicine arose at Paris and Salerno, study depended largely on texts from the Roman era, most notably those of Galen.  Galen brought us the theory of the four humors, and based his anatomies on pig dissections.  So he’s perhaps not the most reliable of sources.  Still, the educated practitioners of the day, the Physicians who ruled at the universities, thought so highly of Galen that, if a patient on the operating table had anatomical deviations from Galen’s observations, it was the patient who was presumed to be deficient (perhaps because the patient was human, rather than porcine).

In the Muslim world, medical practice progressed far beyond Galen, with frequent improvements in technique, like moving from cauterization of wounds to the use of ligature to control bleeding.  The prophet Mohammed has great respect for physicians, which carried through into a wider societal interest in teaching medicine and sharing medical knowledge. This tradition began to influence European practice during and after the Crusades, when European nobles first exposed themselves to Islamic culture of the time, and translations of Classical texts began to return to Europe.

Prior to the fourteenth century, most medical texts appeared in Latin, but after this time a variety of works appeared in the vernacular, including illustrations to aid the reader in reproducing complex operations.   For this explosion of knowledge, and its dispersal, we must thank not the lofty physicians, but the surgeons. Regarded as mere craftsmen for their more hands-on approach and real-world knowledge, surgeons often kept records of their operations and corresponded with their counterparts about the practice of their art.

Many established surgeons wrote treatises about particular treatments and injuries, as well as manuals of general surgery, in particular to offer access to medical education for those who could not afford the services of a higher class of surgical professional. These works reveal a variety of practices and operations, including intimate examinations, probing of injuries, and multiple treatment approaches. Henri de Mondeville (1260-1320), surgeon to Phillip the Fair and later a professor of anatomy at Montpellier, even addresses cosmetic surgery of the breast and face.

Contrary to the image of the medieval surgeon as eager to cut or burn, these medical texts reveal a humanitarian and often minimalist approach to surgery and wound care. De Mondeville advocated cleanliness and the avoidance of pus (claimed by some physicians to be a sign of healing–“a laudable pus”) in accordance with the practice of Hippocrates. Arnold of Villanova listed four considerations before performing any operation, most notably, what good reasons require the surgery, and whether it is both necessary and feasible. Guy de Chauliac, surgeon to Pope Clement VI, maintained both himself and his noble patron through the plague years of 1347-50, by use of a practical approach to hygiene and limiting interactions with others. The texts were widely distributed and often quoted one another, revealing a lively network of surgeons across Europe building upon one another’s work.

Treatises on specialized operations and common conditions—like cataracts—proved especially popular and passed from hand to hand (or hand to scribe) across Europe. 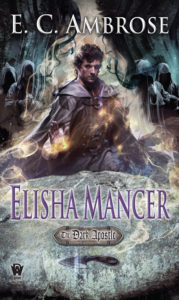 My series, The Dark Apostle, which continues this month with volume 4, Elisha Mancer, owes a debt in particular to the works of Ambroise Pare (from whom I also take my name), a 16th century French barber-surgeon who wrote treatises with medical and surgical advice, as well as a memoir of his experiences in battle.  I honor this medieval tradition of sharing medical knowledge and hope it enhances the adventure and intrigue of my fantasy novels.

Want to know more?  For sample chapters, historical research and some nifty extras, like a scroll-over image describing the medical tools on the cover of Elisha Barber, visit www.TheDarkApostle.com/books
E. C. Ambrose blogs about the intersections between fantasy and history at http://ecambrose.wordpress.com/
https://twitter.com/ecambrose