Home » Blog » How did I learn to be a feminist? By reading ballet books

When I was a little girl, I was a voracious reader (no surprise). I read everything, but I had a particular love for ballet books, especially the Sadler’s Wells series by Lorna Hill.

My mother, who hated to see me reading the fantasy and science fiction stories I also loved, would smile approvingly at the ballet books. So feminine! So appropriate! And yet…I learnt more about being a feminist from those books than from anything else I read. Because ballet books are inherently subversive to a patriarchy.

Not directly – the word ‘feminist’ was never mentioned. But what was the story, repeated in almost every book, with minor variations in what dances were being performed and how many horses were ridden while on holidays?

Girl becomes young woman while devoting herself unstintingly, joyously and ferociously to her art.

Girl is rewarded for her ambition and dedication.

Dance is a discipline, and the women who wrote these books knew that. You can’t be a professional ballet dancer if you only play at it. It’s all or nothing. And once you accept that, as a writer, you inevitably subvert patriarchal notions of what a young woman should be like. This is also true of singing and acting and music, as shown in, for example, Noel Streatfield’s books. (And all stories which make creative endeavour the main goal are subversive to capitalism, as well.) 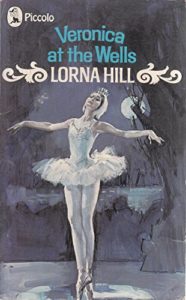 Let’s look at Veronica Weston, the heroine of A Dream of Sadler’s Wells and Veronica at the Wells. The first book deals with Veronica’s journey to become a student at the Sadler’s Wells ballet school in London (now the National Ballet School). Veronica is an orphan, sent to live with quite well-off relatives, and struggles to continue her dancing in the wilds of Northumberland. During this book, she meets Sebastian Scott, who has ambitions to be a composer of classical music. The book ends with Sebastian helping her on a wild ride through thick fog to catch a train to her audition – where, of course, she is successful.

Note what Sebastian’s role is in this: the helper, not the hero. (But definitely set up as an age-appropriate love interest.)

The second book picks up with Veronica’s first term at Sadler’s Wells, and takes us through classes, rivalries and more hard work. In that, it’s not so different from a lot of school stories of the time. But what happens at a major turning point? Sebastian, who has been working away at his music instead of becoming a lawyer as his parents wish, has composed his first symphony, and it’s going to premiére in Newcastle. But Veronica gets a telegram from the Ballet saying a part is available for her – her first real part. Sebastian says, ‘Stay! I wrote this symphony for you because I care about you! It’s inspired by you!’

Does Veronica stay and support Her Man at his important part of his life? Is she ravished by the idea of being a muse?

Nope. ‘Sorry,’ she says, with much heart-wringing, and off she goes to London to take up her rightful position on stage. Sebastian is quite cross about this and cuts ties, but she is determined that her career is important. (Subversion alert!)

We then fast forward through the next few years as she gets bigger and bigger parts, culminating in her dancing Odette/Odile in Swan Lake and becoming the newest prima ballerina.

Now comes the second big subversive moment. After the climactic performance, in walks Sebastian, realising that she was right all along, and being loving and supportive. She hasn’t had to give up love after all! She was right to put her own career first.

Those books were written in 1950 and 1951. Think about the messages girls were getting in the ’fifties and ’sixties about the place of women and how they should abandon their ambitions to support those of men. How amazing this story must have seemed to them.

And in subsequent books in the series, Veronica and Sebastian play small roles – we see her marry, have a baby, continue working (at a time when most women were out of a job on the day they married), and thrive.

This image of a girl who puts her creative and career ambitions first and is then rewarded for that by success and an equal, loving partnership for a marriage…that’s subversive even today. It was astounding in 1950, and in the late 1960s when I read these books, but it seemed natural because…well, ballet. Beautiful, entrancing, dainty ballet.

I can’t help wondering how many feminists were budded by ballet books while their mothers looked on, fondly thinking they were learning how to be feminine.

And, as a children’s writer, I wonder what the equivalent subversive content might be for today’s children…